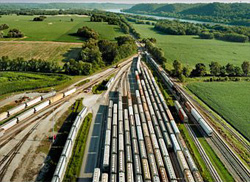 Scope of business: Carrying out cargo railway transport within a domestic and/international communication, hiring locomotive traction for performing international cargo transport, maintenance and repair of rolling - stock (locomotives and wagons ), а s well as any other activity permitted by the law .

The Company holds a licence for carrying out railway transport services. It also holds a certificate of safety according to the requirements of certification of transport means maintenance.

Real estates : In the Company inventory there are registered 790 real estates located all over the territory of the country. The land has an area of 1 100 000 sq.m.

Machinery and equipment: The Company has 185 locomotives and 4800 goods wagons . The operation and the maintenance of the wagons and locomotives, is carried out in the so called railway repair shops and locomotive depots. The shops and the depots dispose of the technological equipment of repairing all wagon and locomotive series .

We seek a strategic investor who collectively meets the following requirements :

We seek a financial investor who collectively meets the following requirements :

As a result of the higher incomes made and the reported expenses the Company completed the six months of 2014 with a negative financial result amounting to 3 674 thousand Euro improved with 249 thousand Euro compared to the respective period of the previous year.

EBITDA is 2 148 thousand Euro, improved with 461 thousand Euro compared to the statement for the same period of the previous year.

EBIT has reduced its negative amount from 3 928 thousand Euro for the previous year to 3 536 thousand Euro in the first six months of 2014 i.e. there has been reported an improvement with 392 thousand Euro.

The coefficient of quick liquidity also has registered growth for the reviewed period with 0,08 points and compared to the plan - worsening with 0,01 points .

The self-owned capital has registered reduced amount during the six months of 2014 compared to the respective period of the previous year with 1 308 thousand Euro . This is due to the accrued loses from previous periods.

Under type of cargo, the transported quantities are as follows:

In the export and import there has registered an increase of 20,0% and 8,2% of the transported cargo respectively, but this cannot compensate the significant decrease of 43,6% in the transit transports.

The data of the movement of assets and liabilities under balance sheet as tо 30. 06.201 4 shows:

The total amount of the short term debts as per balance sheet is 55 058 thousand Euro, including the major ones from these are to:

Presently our China Railway Group is intending to purchase ballast regulator(1),tampers(2),track stablizer(1) for carrying out a project in Malaysia. If your company can give us a CIF price and time of delivery on any machine I mentioned above,we...